“What a show! I would love to see these two very talented personalities back on stage in a showroom in Las Vegas.”
-Luke Perry, Producer, Luke Perry’s PN Awards Las Vegas

“You guys were the best ones in the show!”
-John Stuart, Creator , Legends In Concert

"You guys were amazing!!! Your Cher and Bill Medley were spot on! Your whole band is outstanding. The feedback from our VIP's was tremendous! I hope we can get you back soon!!"

The Time Of  Your Life! Promo Video

Thompson is best known for her portrayal of CHER, with 18 years as a mainstay in the Las Vegas production of “Legends In Concert,” as well as, national TV appearances on “The View,” “The Nanny,” “Ellen,” and more.  Her comedy and wit are second to none.

Sironen was a mainstay for 10+ years in the Las Vegas production of “Legends In Concert” with his “Tribute To The Righteous Brothers,” wherein he was named “Best Male Singer in a Las Vegas Production Show.” 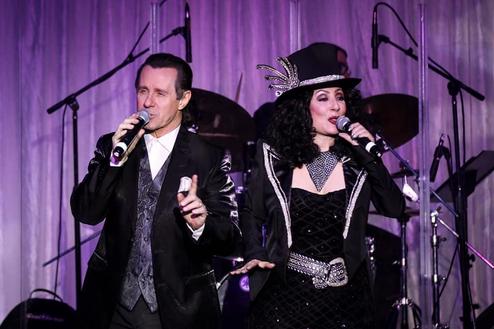 THE TIME OF YOUR LIFE! – THE SHOW

Gene Sironen as Bill Medley (of The Righteous Brothers)

Together, Gene Sironen and Heidi Thompson bring a unique energy to the stage with their own brand of comedy, duets, audience participation and more.  Experience, professionalism and dedication have given them the longevity to perfect a highly crafted show, garnering laughs, applause and happy audiences wherever they perform.

With iconic songs such as “You’ve Lost That Lovin’ Feeling” which beat out the Beatles’ “Yesterday” for the most played song on the radio, and “I’ve Had The Time of My Life” from the movie “Dirty Dancing,” it is easy to see how Bill Medley of “The Righteous Brothers” is a surefire audience hit!

Then, “Turn Back Time” with the diva herself, Cher, and you will “Believe” in decades of musical memories to please any “Gypsies, Tramps and Thieves!” Add to that, some audience participation during “I Got You Babe” wherein an unsuspecting male is brought up on stage to don a wig and become “Sonny,” or where several ladies join Cher as backup dancers on “Shoop Shoop,” from the movie “Mermaids.” Costume changes, duets and creative banter enhance this wonderful mixture of “Blue-Eyed-Soul” and “Diva Pop!”

If you love some “Old Time Rock-N-Roll” and your “beat is still goin’ on,” then join Bill Medley and Cher for “The Time of Your Life!”